Processes in nature are often sometimes characterized by disorder and other times by order.  Such is the case with the phenomena of combustion; one can compare the disorder of a crackling flame in a fireplace to the order of a candle flame in still air.  Analogs exist in high-speed combustion such as might be present in rocket nozzles or high speed air-breathing jet engines.  Here, a paradigm problem in high-speed combustion will be considered in which the transition from order to disorder will be studied in a controlled fashion.  The mathematical model is one that closely mimics nature, namely the compressible reactive Navier-Stokes equations for a mixture of calorically imperfect ideal gases that react via a model of detailed chemical kinetics.  The key physical mechanisms considered are reaction, advection, and diffusion. Their relative importance dictates the physical flame structures, which are predicted.  One-dimensional unsteady models of hydrogen-air combustion are examined.  The solution is mathematically verified by use of a wavelet-based method, which adapts the computational grid automatically so as to meet a user-specified error tolerance.  The solution is then validated by comparing its predictions to those of similar experiments.  Importantly, both the model and the experiment reveal a fundamental frequency of about 1 MHz.  This resonance is mainly driven by reaction and advection between the lead shock and the end of the reaction zone, somewhat analogous to standing waves in organ pipes.  For higher frequency modes, the influence of physical diffusion is more important.   The model is then used to study the non-linear dynamics of oscillatory combustion, and a variety of harmonic modes are revealed as part of a transition towards chaos.  For simple kinetic models, the transition is characterized by a bifurcation process well-characterized by the Feigenbaum constant.  For detailed kinetics, a more complex transition is predicted. 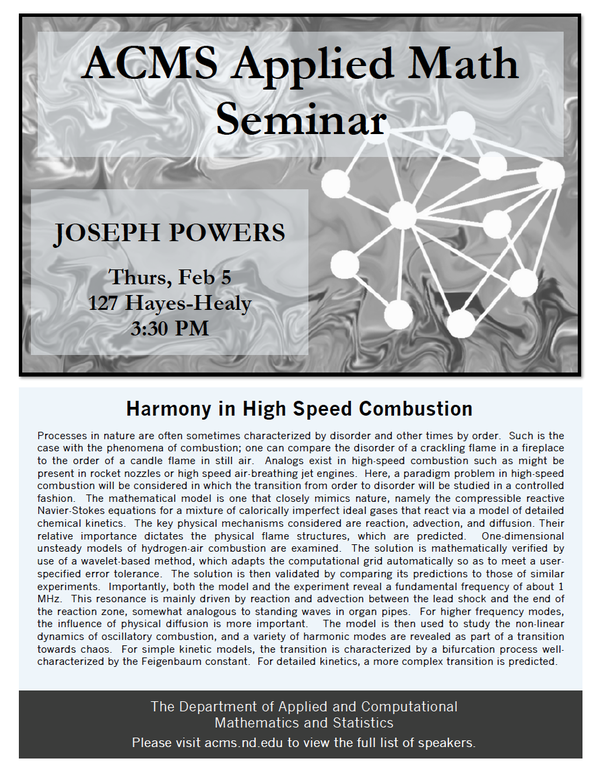