The concept of critical concentration is a central idea in the understanding of biological polymers such as actin and microtubules. Classically, the critical concentration (Cc) is accepted to be a single discrete value with several equivalent definitions, including the ideas that Cc = [total subunit] needed to obtain any polymer, and that Cc = [free subunit] once [polymer] has reached a maximum.  However, the mathematical underpinnings of this understanding are based on analysis of equilibrium polymers, which is problematic because these cytoskeletal filaments are instead steady-state polymers.  This incongruity raises questions about whether present understanding of critical concentration as it applies cytoskeletal filaments is complete or even approximately correct.  We have used computational models of systems of dynamic microtubules to investigate this issue. We find that instead of the microtubule system having a single critical concentration that is assigned by several equivalent definitions, the varied definitions of Cc yield empirically different values and so are not equivalent. In particular, the models show that there is no well-defined value at which microtubules begins to appear, and that the experimental interpretations previously thought to yield the Cc for polymer formation actually yield the Cc for persistent polymer growth. While these ideas conflict with classical understanding of polymer assembly, they are in fact consistent with the literature on experimental microtubule dynamics.  Our resulting  revisions of the concept of critical concentration have significant implications for the design and interpretation of experiments with microtubules and likely have relevance to any steady-state polymer system.

If time allows, I will also discuss some preliminary work on a new project, which is to use combined experiments and stochastic simulations to improve understanding of how differences in environment (specifically, competition for food) impact the generation of genetic diversity in parallel populations of microorganisms. 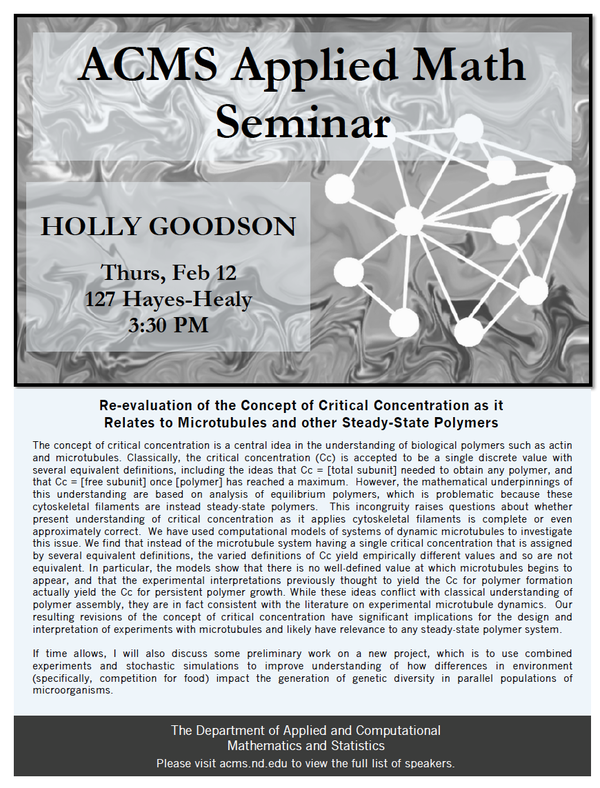