As old as any issue in science and mathematics is the polarity between discrete and continuous.  The details change from century to century, but a synthesis still challenges us. This talk will comment on some of the long history and current state of interplay between these two ways of thinking.

Nick Trefethen is Professor of Numerical Analysis and head of the Numerical Analysis Group in the Mathematical Institute at Oxford University. He was educated at Harvard and Stanford and held professorial positions at NYU, MIT, and Cornell before moving to Oxford in 1997. He is a Fellow of the Royal Society and a member of the US National Academy of Engineering.

As an author he is known for his books Numerical Linear Algebra (1997), Spectral Methods in MATLAB (2000), Schwarz-Christoffel Mapping (2002), Spectra and Pseudospectra (2005), Trefethen’s Index Cards (2011), and Approximation Theory and Approximation Practice (2013). He is an ISI Highly Cited Researcher, with about 100 journal publications in numerical analysis and applied mathematics, and has served as editor for many of the leading numerical analysis journals. He has lectured in about 20 countries and 30 American states, including invited lectures at both ICM and ICIAM congresses.

Some of Trefethen’s recent activities include the SIAM 100-Dollar, 100-Digit Challenge, the notion of Ten Digit Algorithms (“ten digits, five seconds, and just one page”), and the Chebfun software system for numerical computation with functions. During 2011-2012 he served as President of SIAM. 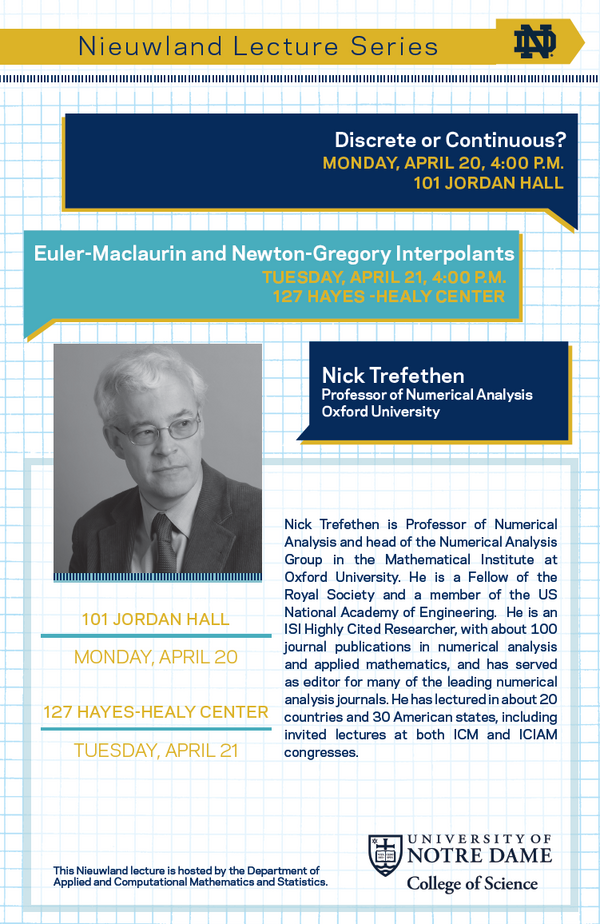