Allison Dahl - Allison is a derivatives analyst for Allianz Investment Management at Allianz Life Insurance Company of North America in Minneapolis, MN. As a member of the Fixed Index Annuity Portfolio Management team, her responsibilites include static and dynamic hedge production as well as software development. She graduated from the University of Notre Dame with a Bachelor of Science in Applied and Computational Mathematics and Statistics and  a minor in Actuarial Science in 2016.

Jeremy Doyle - Jeremy currently works for Liberty Mutual in the Actuarial Development Program on the Commercial Insurance Actuarial Planning and Analytics Team. Jeremy graduated from the University of Notre Dame with a major in Honors Mathematics and a minor in Actuarial Science and Honors Program.

Nicole Frederickson - Nicole is an actuarial analyst at Willis Towers Watson's Retirement Consulting business in Chicago. She works on a variety of projects including risk management strategies, and workforce retirement readiness. Nicole graduated from ND in May 2016 with a major in ACMS an minor in Actuarial Science. She is currently pursuing her ASA credentials.

Chris Hecht - Chris is an Actuarial Assistant at Liberty Mutual in Seattle, where his primary role is to complete semi-annual Profit Assessments of Liberty Mutual's Homeowners Insurance book of business. Chris majored in ACMS & Economics and minored in Actuarial Science while at Notre Dame. He is a native of Cincinnati, OH and was a resident of St. Edward's Hall throughout his undergraduate career.

Jesse Keipp - Jesse is a quantitative analyst with BMO Financial Group, where he has worked since June 2016. As a quant, he develops credit risk models, primarily for Federal Reserve and Basel regulations. So far, his projects have included co-developing a PD stress testing model for BMO's $4 billion transportation finance loan protfolio and repurposing that model for Basel II capital adequacy rules. Jesse holds a B.S. in Applied Mathematics from the University of Tulsa, where he graduated with honors in 2015. In 2016, he completed his M.S. in Applied and Computational Mathematics and Statistics from the University of Notre Dame. 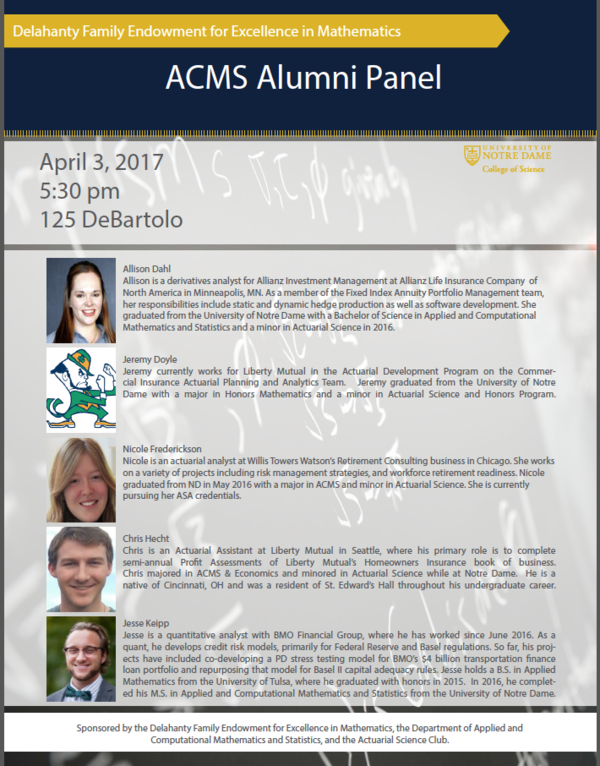