Andy Hiles is a business leader with over 20 years' experience in benefits strategy, design, funding and administration. Andy joined Aetna in 2014 and is the Vice President, National Accounts Risk Management and Analytics. Andy has responsibility for several functional areas, include Strategy, Underwriting and Actuarial. He is also the P&L leader for Aetna's $700M insured exchange relationship. Prior to joining Aetna, Andy was the national Employee Benefits Practice Leader at McKinsey & Company, a global leader in management consulting. While at McKinsey, Andy served a wide variety of clients helping the C-suite align benefits with business results. In addition, Andy has held leadership roles at major benefit consulting firms - Willis Towers Watson and Aon Hewitt. Andy is a published author of over a dozen articles and is a frequent speaker on employee benefits. Prior to joining Aetna he was on the National Business Group on Health's Racial/Ethnic/Socioeconomic Health Disparities Advisory Board, and held a similar position as an advisor to WellPoint. His most recent article centers on the consulting community's transition from discount-based carrier evaluation models to risk-adjusted total cost of care methodologies. Andy earned his Bachelor of Arts in Economics from University of North Carolina at Greensboro. He is a Fellow of the Society of Actuaries and Member of the Academy of Actuaries.

Craig Bauer started his career with Aetna in 1997 and is currently the head actuary for Aetna's National Accounts business, a position he assumed in April 2016. In this role, he partners closely with Finance, Sales and Underwriting to drive profitable growth across all products and services for employers with over 3,000 employees. Craig previously was the head actuary for Aetna's Southeast and Mid-Atlantic territories, where he had responsibility for all actuarial functions supporting commercial individual, small group, middle market and public and labor business. Prior to his territory role, Craig was the Senior Actuary for Aetna's Health Care Reform Project Management Office, where he led all actuarial, underwriting and risk management-related activities, including advocacy efforts in support of Aetna's enterprise strategy. Craig's earlier positions at Aetna include lead pricing actuary for Medicare Part D and Medicare Supplement, head of Aetna's health rating systems department, and several pricing actuarial roles for small and large group business segments. Craig is a Fellow of the Society of Actuaries and a Member of the American Academy of Actuaries. He holds a bachelor's degree in mathematics and a master's degree in statistics, both from Washington University in St. Louis.

Chad has over 10 years of experience in the insurance and consulting industries. Chad joined Aetna in 2008 and is currently the Director of National Accounts Fully Insured Business and part of the Field Actuary team. Chad oversees the pricing for all fully insured national account business, including both the Aon Hewitt Corporate Exchange and traditional fully insured customers. As part of the Field Actuary team, he supports the competitive strategy for self-funded cases in the Southeast region and the Hospital Vertical team. In this role, Chad works closely with sales and marketing internally at Aetna while also wroking externally with consultants, customers, and providers. Prior to Chad's current role, he worked in a number of roles in Aetna's Local and Regional Business teams, supporting the commercial individual, small group, and middle market businesses. He was the Plan Actuary, supporting pricing, reserving, and forecasting for Maryland, Deleware, and West Virginia. He also designed the current forecast, pricing, and reporting models that are used nationally at Aetna. Before Chad's time with Aetna, he worked for both Coventry and Willis Towers Watson. Chad earned his Bachelor of Science in Actuarial Science from Lebanon Valley College. He is a Fellow of the Society of Actuaries and Member of the Academy of Actuaries. 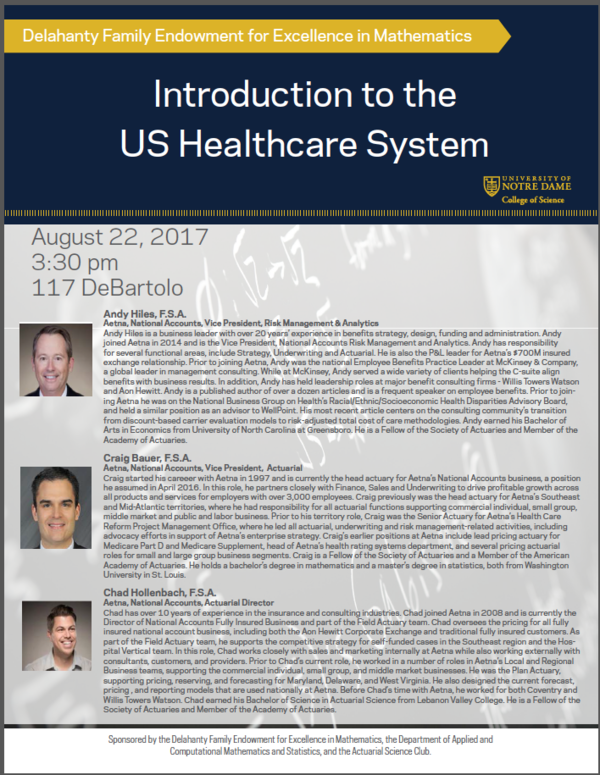