Statistical inference on nonparametric functions has been widely considered as an important topic, and especially model selection problems for high-dimensional additive models have been studied more recently. This talk contains mainly two contributions. First, we introduce a class of novel prior densities called nonlocal functional priors that are suitable for nonparametric Bayesian hypothesis testing (model selection) problems. We show that local prior densities, which assign positive probability around a null function in nonparametric Bayesian tests, provide exponential accumulation of evidence in favor of an alternative hypothesis under a true alternative hypothesis, but only a polynomial rate of accumulation in favor of null hypothesis under a true null. This imbalanced behavior of the rate of Bayes factor can be ameliorated by the nonlocal functional priors, and the resulting hypothesis testing procedure strongly penalizes a case where the null hypothesis is rejected. Second, we apply the proposed prior densities for high-dimensional model selection of nonparametric additive models, and investigate the model selection consistency of the resulting model selection procedure. We show that the asymptotic rate of the posterior model probability defined by the proposed prior contains a unique form of a penalty term that adapts to the marginal effect of the B-spline estimator. This term does not appear in the posterior model probability from classical priors such as g-priors. We provide some simulation studies and real data examples and the proposed model selection procedure outperforms state-of-the-art competitors in finite samples. 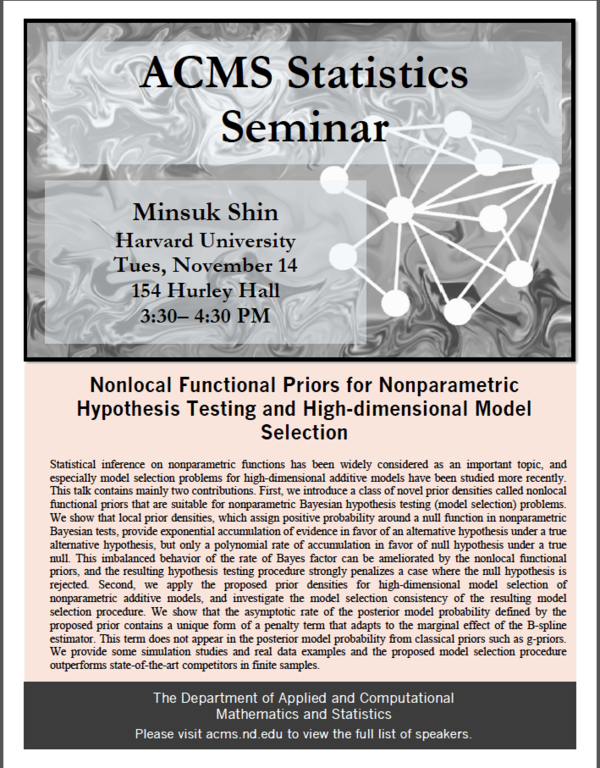