Phylogenetic Species Trees as Optimization Problems and Connections to Statistics and Geometry.

The fundamental problem in phylogenetics is to infer the evolutionary history of a group of species. This history is usually represented as a rooted tree whose leaves are the extant species from which data can be gathered. Molecular phylogenetics has led to some grand scientific challenges, driven by advances in genome sequencing technology: (1) data is gathered from long genomes for which evolutionary transformations must be modeled by myriad processes, (2) different regions of these genomes may have different evolutionary histories, and (3) there are intractable computational issues presented by the amount of "big data" used in the inference process. Fortunately for the interested mathematician, some of the most promising methods in phylogenetic inference use information about probabiity distributions of genes within large genomes. We will show this leads to interesting connections between statistics and algebraic geometry, and that these connections lead to discoveries that have implications for phylogenetic method development. No previous knowledge of phylogenetics will be assumed. This talk is based on joint work with Jed Chou, Ashu Gupta, Mike Nute, Siavash Mirarab, Pranjal Vachaspati, Tandy Warnow, and Shashank Yaduvanshi. 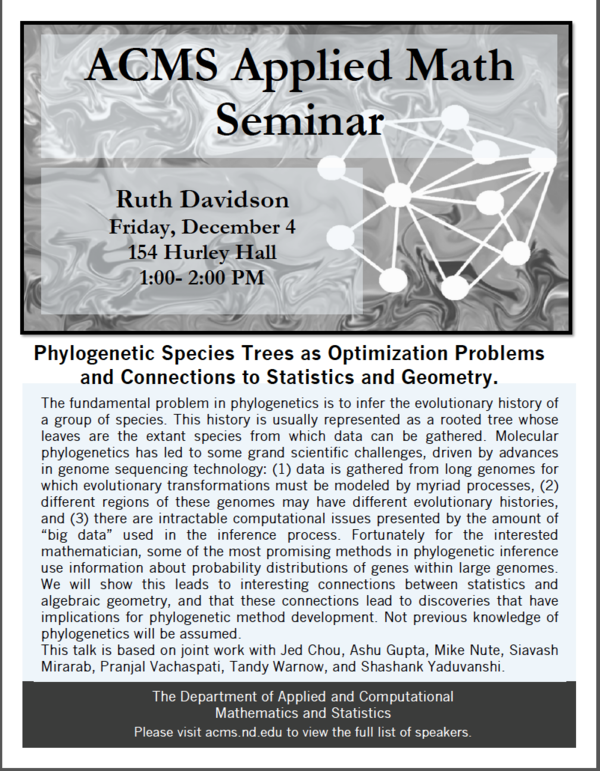