Pete Effler has spent a 32 year career in leadership positions in the insurance and consulting industries. As Chief Operating Officer of American Modern Insurance Gropup in Cincinnati, he has overall responsibility for the company transformation, information technology, and overall business operations.

Pete stared with American Modern in February 2005 as senior vice president of operations for the Financial Institution Division (FID) and significantley grew that part of the business. In addition, Pete also had responsibilities in the personal lines business, strategic alliances, and sales operations. Starting in 2011, Pete assumed COO responsibilities including leadership of the IT organization and Insurance Operations.

Prior to his tnure at American Modern, Pete was a partner at Accenture where he worked with a variety of manufacturing clients from 1985 to 2005. He graduated from the University of Cincinnati with a M.S. in Industrial Engineering , and the University of Notre Dame wit a B.S. on Mechanical Engineering and a B.A. in Communication. 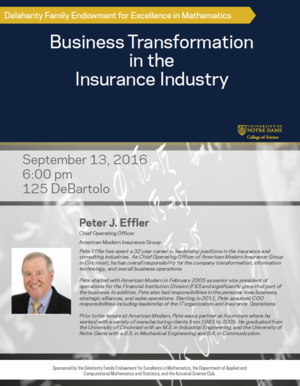