We propose a statistical space-time model for predicting atmospheric wind speed based on deterministic numerical weather predictions (NWP) and historical measurements. We consider a Gaussian multivariate space-time framework that combines multiple sources of past physical model outputs and measurements along with NWP model predictions in order to produce a probabilistic wind speed forecast within the prediction window. The process is expressed hierarchically in order to facilitate the specification of cross-variances between the two datasets. We illustrate this strategy in wind speed forecast during several months in 2012 for a region near the Great Lakes in the United States.

Secondly, independently from that previous work, we discuss a statistical space-time characterization of the sub-grid variability of air-sea fluxes. Indeed many physical phenomena happen at scales finer than the discretization one and these interact with the resolved scales. Hence, quantifying the influence of the sub-grid scales on the resolved one is needed to better represent the resolved scales in the entire system. We evaluate the difference between the true turbulent fluxes and those calculated using area-averaged wind speeds. We investigate a space-time characterization of this discrepancy, conditioned on the low resolution fields, with the view of developing a stochastic wind-flux parameterization. The study is performed on high resolution simulation on a large domain that extends across the Indian Ocean into the West Pacific. 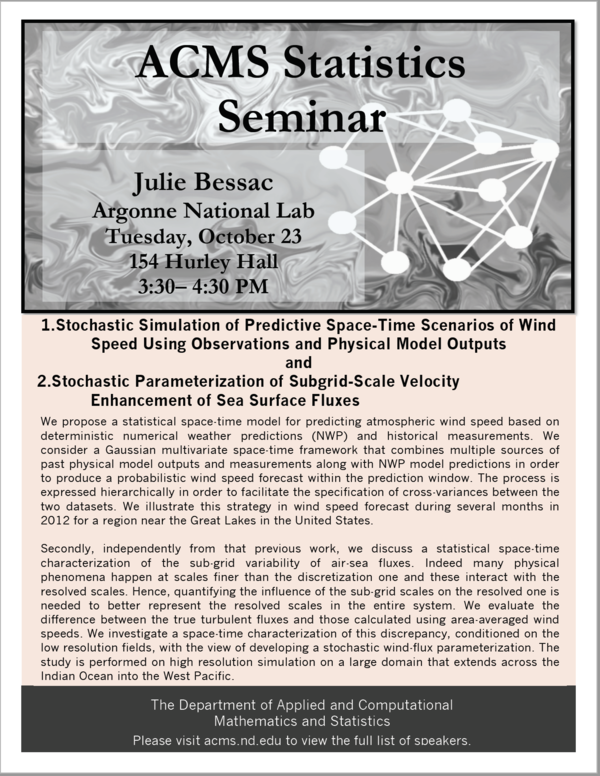