We consider algorithms for propagating uncertainty through computational simulation models of varying fidelities. Our goal is to estimate, or predict, quantities of interest from a specified high-fidelity model when only a limited number of these simulations is available. To aid in this task, lower fidelity models can be used to reduce the uncertainty of the high-fidelity predictions. We discuss several new developments we have made in these areas that include a new generalized approximate control variate sampling approach and a Bayesian network-based higher-order approach. The approximate control variate approach develops a framework for obtaining statistical estimators that have reduced variance with respect to Monte Carlo in cases where the control variates have unknown means. Our approach is motivated by certain sub-optimality properties of common multifidelity sampling techniques that include multilevel, multi-index, and multifidelity Monte Carlo; we show that each of these existing techniques cannot reach the variance reduction performance that would be achieved by an optimal linear control variate scheme. We then describe a new framework for computing approximate control variate estimators that does converge to the optimal linear control variate and that can also achieve orders of magnitude reduction in estimator variance relative to existing approaches.

Next, we consider higher-order approaches to modeling multifidelity UQ problems using Bayesian networks. Here a latent variable network structure for the statistical independence relationships between the models is learned from available simulation data. First a latent variable model is posed for each simulation model under consideration; then a network structure between the models is learned; finally, predictions are made for the output of the highest fidelity model. We demonstrate the utility of this approach for creating more robust models. We also show how existing techniques, such as control variate Monte Carlo and recursive co-kriging can be recovered. Furthermore, we consider both the tasks of learning the graph structure and parameters of the conditional probability distributions. Examples are provided for both synthetic and physics-based simulations. 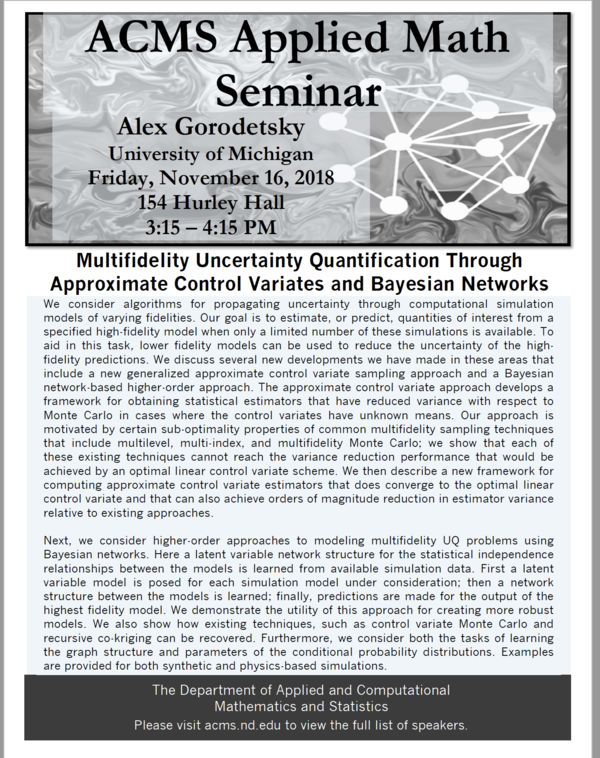